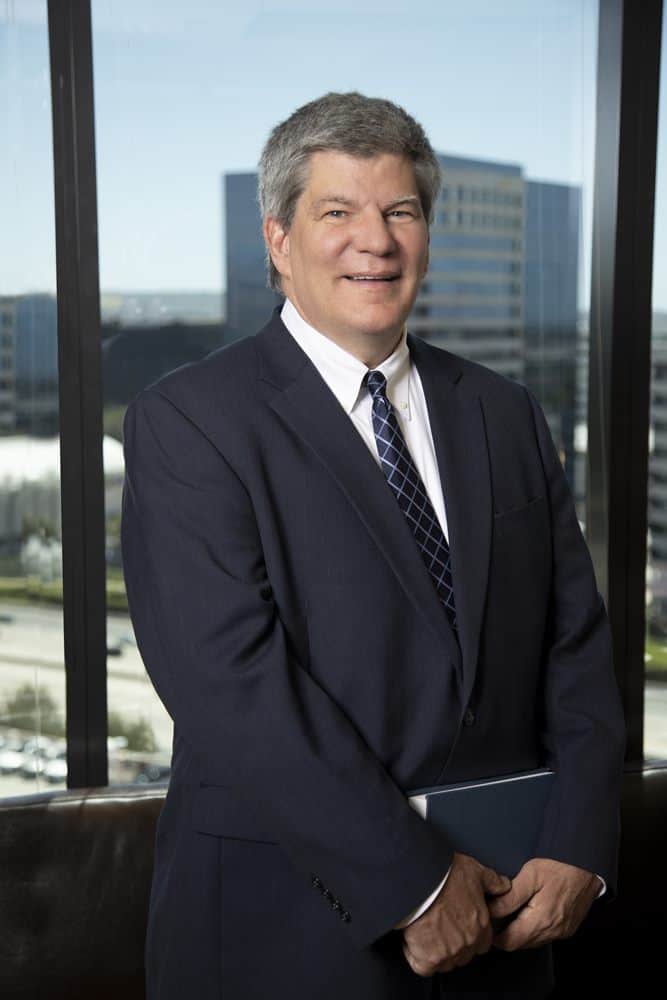 John has spent over 25 years handling personal injury and death cases. He is a Lifetime Member of the Million Dollar Advocates Forum and the Multi-Million Dollar Advocates Forum. Membership in these groups is limited to those personal injury lawyers who obtained significant verdicts or settlements on behalf of their clients. Such verdicts include a $14M helicopter crash verdict, an $11M airplane crash verdict, a $7.25M verdict for insurance bad faith, a $7M pedestrian wrongful death case, a $5.77M judgment for fraud and invasion of privacy, a $2M trucking accident case, and over $2M in settlements for a spinal cord injury victim. John has a perfect 10.0 rating in the fields of Personal Injury, Truck Accidents, Auto Accidents, and Wrongful Death with the independent rating service Avvo.com, an online service which rates lawyers on their legal abilities, peer recognition, and ethical standards. He is a recipient of the 2014 Avvo Clients’ Choice Award and the Top Contributor Award. John is peer-rated with Martindale Hubbell and received their highest rating of Preeminent in 2014. He was one of five lawyers in the State selected by Missouri Lawyers Weekly as “Up and Coming Lawyers.” He is a recipient of the Milton F. Napier Trial Prize, the Lewis Powell Jr. Trial Award, and the Golden Quill Legal Writing Award. John was also ranked by his attorney peers in the personal injury legal community through Martindale Hubbell, and received the highest distinction, AV Preeminent. John is also one of the few attorneys who is NBTA Board-Certified.

John also received the SBC Vail Award and the Humanitarian Lifesaver Award from the American Red Cross and KSDK Channel 5 after he saved a co-worker’s life when he had a heart attack in the office.

John is licensed in California, Missouri, Illinois, and Arkansas. 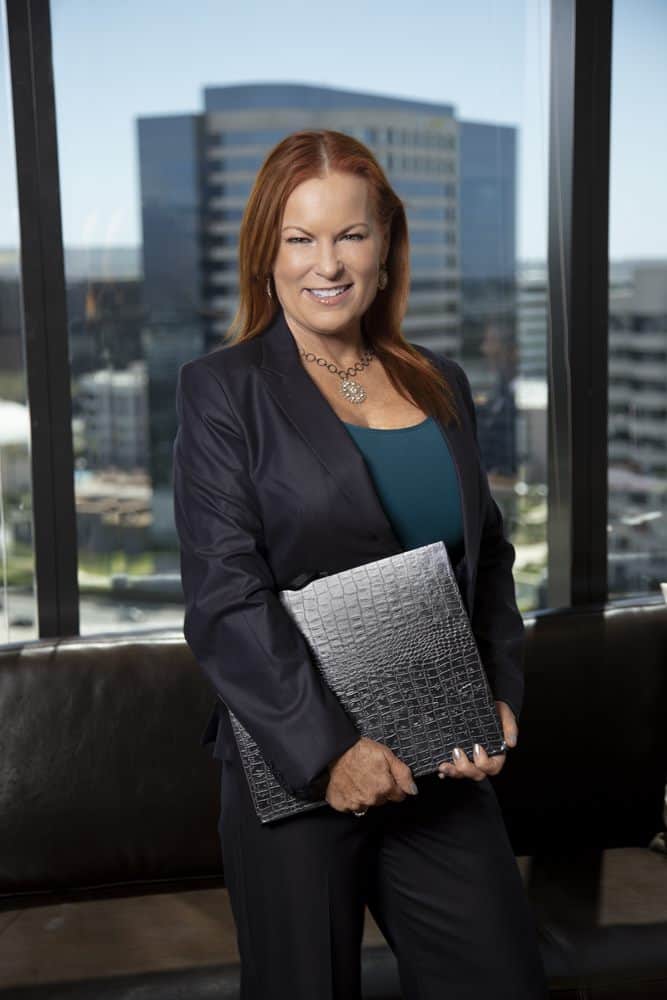 After clerking for Judge Crandall on the Missouri Court of Appeals, Tammy worked at a large defense firm at the beginning of her career. In 1997, Tammy became weary of representing large corporations and felt that she was better suited to help those in need–wrongful death claimants, auto accident and workplace accident victims, and victims of medical malpractice. She left the large defense firm and opened her own law practice, and since that time has only represented plaintiffs.

Having spent time working on the defense side, Tammy is well-equipped to counter the defenses asserted by the large corporations whose negligence has caused her client’s injuries.

Tammy is licensed in both Missouri and Illinois and would be honored to review your case for free and get you the justice you deserve.

So enough about our résumés. This is a big decision you need to make—which attorney is right for you? Why don’t I take a minute to tell you a little bit about who we are and why I believe that our law firm will be the best fit for you and your family.

My name is John Medler. I grew up in St. Louis, Missouri. When I was fifteen, I tried out for a high school play, South Pacific, at a local high school near my house. I got a very minor part in the play—I used to joke that I was a tree. But the star of the play was a red-headed girl named Tammy. I fell head-over-heels in love with her in 1978, and I have never turned back. We have been together for over 40 years. She is the love of my life.

After high school graduation, I went to Brown University in Rhode Island, while Tammy went to Washington University in St. Louis. We had a long-distance relationship for four years and ran up a lot of long-distance telephone bills. In 1985, Tammy and I both attended the same law school, Washington University Law School in St. Louis. We married during our second year of law school and began a family shortly thereafter. We were penniless but happy, and excited about the future.

We are so very blessed to have raised six fantastic children. In the early 1990s, Tammy gave birth to three sons: Ryan, Kevin and Cody. Life was very fun and hectic with our boys. They sure had a lot of energy! In 1995, Tammy and I saw a news program about children in overseas orphanages. The documentary showed child centers in which two or three staff members were responsible for taking care of over 100 children. The news footage saddened us. We knew we could provide a happy home for one of these children, so in 1996, we adopted a nine-month-old doe-eyed little girl named Natasha from a Russian orphanage. Then, a year later, Tammy gave birth to our daughter Sabrina. In 2002, we still felt like we had more love to give, so we adopted a four-year-old girl from Guatemala. Our experience with adoption was so wonderful that Tammy began helping clients with the legal paperwork needed to adopt children internationally. Tammy took great pride in seeing couples—many times couples who could not have biological children of their own—beam with happiness with their new children.

When our oldest child, Ryan, was only three years old, he was diagnosed with kidney cancer. That rocked our world. Sadly, our pediatricians missed the diagnosis at first. Fortunately, however, with a year of chemotherapy and radiation, and a lot of prayers, Ryan was cured. During that year of treatment, we encountered many families whose children had cancer and did not survive. Tammy and I met so many overwhelmed families who had a disproportionate amount of serious troubles, yet still remained amazingly strong and loving people. That experience—both the medical malpractice and the near-loss of our son—convinced Tammy and I that we needed to spend our life helping people who were injured through the negligence of others. Years later, Tammy and I set up our Plaintiff’s personal injury practice in St. Louis, and we have been helping people like you ever since.

Many people ask what it is like to work with your wife every day. I love it. We work on our cases all the time. We will talk about them over dinner. Our clients are very important to us. We feel a great responsibility to our clients and always give our best, because we believe that God has blessed us with so much. I think that the strength of our relationship has helped us meet the needs of our clients. You can feel confident that we will help you through this difficult time in your life.

In around 2007, Tammy and I started to dream of moving to California with our family. The plan was to move here after our youngest went to college. Whether by design or fluke, nearly all of our children decided to attend college in California. Ryan went to UCLA. Kevin goes to Woodbury Architecture School in Burbank. Cody attended UC-Santa Barbara. Natasha attended college in Chicago but then moved to Los Angeles. Sabrina attends Stanford University. And Wendi attends Irvine Valley Community College. We decided it would be great to move to California to be near our children. While St. Louis was a fantastic place for us to raise our family, it began to seem like California was where our future was. We admired California’s open-minded thinking and diversity. And skipping those freezing cold winters and humid summers might be nice! In addition, I got to keep watching the Rams football games!

It is unusual to uproot a law practice and move halfway across the country, but we are unusual– and also very confident that it was the right move. We now live in Huntington Beach (one block from the ocean!) and practice law in Irvine. We are happy to be here and look forward to continue helping injured people in California.

We will guide you every step of the way!
We know that being injured and away from work can be a stressful experience.
Call us now
(949) 577-8177 - CALL US 24/7 OR FILL OUT THIS SECURE FORM TO GET OUR IMMEDIATE ASSISTANCE